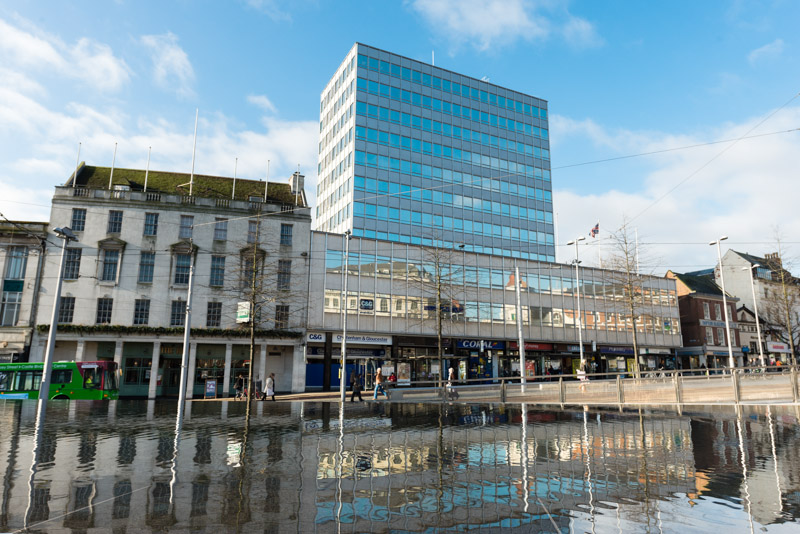 One of Nottingham’s landmark buildings has changed hands in a major investment deal.

Market Square House, which dominates the western side of the city’s Market Square, has been sold by a London-based private property company to an undisclosed purchaser headquartered in the US.

The landmark building, constructed in the 1960’s, totals approximately 62,000 sq ft of accommodation and comprises 8 retail units, a flagship banking facility let to Lloyds Bank, and 8 upper floors of offices.

The sale was negotiated by Nottingham-based property consultants Tim Harries & Partners who have also been appointed by the new owners to asset manage the building on their behalf.

Commenting on the transaction, Tim Harries, senior partner in Tim Harries & Partners, said: “this sale marks the culmination of a number of value-enhancing asset management initiatives completed by the former owners during their period of ownership, and it is pleasing to note that the new owners have already formulated their own exciting plans to invest further in this important building which has been a feature at the heart of the City of Nottingham for 50 years.”

Tim Harries added: “our appointment to advise the new owners of Market Square House further extends our involvement with major buildings in the city centre, and indeed around the Market Square itself, as it complements our firm’s existing management instructions on The Exchange Shopping scheme on the eastern side of the Square.”